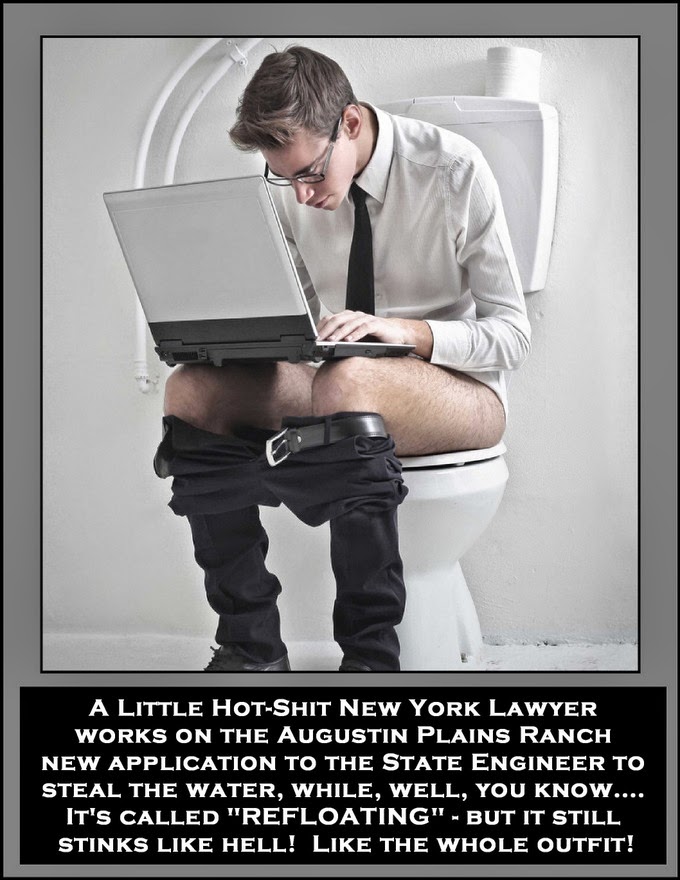 .
Below is a recent article from
ALBUQUERQUE BUSINESS FIRST
that came out last week.  The foreigners and
their lawyers are resubmitting their drilling
application, while at the same time the first application
is sitting in the New Mexico Court of Appeals
awaiting oral arguments.
The article included the photo below,
which says more about the issue than the verbage
(water is MONEY $$$$$$$$).
Commentary will follow shortly. 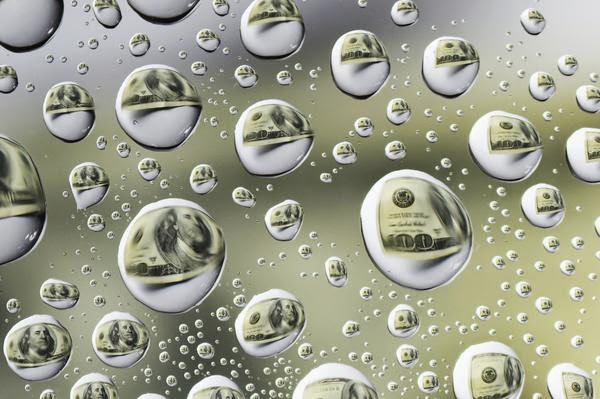 Owners of the Augustin Plains Ranch LLC near Datil are again proposing to build wells and a pipeline that would transfer 54,000 acre-feet of water annually to the Albuquerque and Rio Rancho area.


APR says it already has spent about $3 million investigating the possibility of the project and has now submitted an application
with the Office of the State Engineer to see if an official hearing process can be established.


In 2007, the owners of the ranch, described on its website as a collection of family foundations, submitted a plan to transfer the water. It was turned down in 2012 “because it was vague, over broad, lacked specificity, and the effects of granting it cannot reasonably be evaluated; problems which are contrary to public policy,” according to the Office of the State Engineer. The ranch challenged the denial in court, but the engineer’s decision was upheld.


If it is allowed the proceed, the project is estimated to cost $600 million, said Whitney Waite, a spokeswoman for APR.


“After many months of work, we are pleased to present the OSE with an application that provides information which we believe will allow the project to move forward,” Michel Jichlinski, the project director, said in a news release. “This is a very big step in developing a new and sustainable source of water for New Mexicans for generations to come.”


The project, if developed, would involve drilling 37 wells on the ranch and transporting the water northward through a 140-mile pipeline that would run along existing highway right-of-ways, according to the application.
.
APR said the state engineer’s office is expected to decide within several weeks if a hearing should be pursued. That hearing process, according to APR, could last for up to two years.


That would involve a comprehensive study of the area’s hydrology, potential impacts to local communities, pipeline right-of-way issues, legal and compact challenges among other issues, according to APR.


If approved, APR estimates water could begin flowing into the Albuquerque area in about five years.


“The full and open hearing process will enable New Mexicans to be certain that the project is viable, sustainable, and in the state’s best interest,” Jichlinski said. “The research that will be conducted during the hearing phase will be invaluable in providing data on this resource that is currently sorely lacking. We look forward to having this conversation with all who are interested and wish to fully understand the incredible potential of the San Augustin Basin.”


According to its proposal, APR would build structures designed to capture the run-off from the nearby mountain range and recharge the aquifer to replace what water is withdrawn from it.


At this point, according to APR, it’s too early to determine what return investors would receive. However, in an attachment to the application, the investment bank Ewing Bemiss & Co. said it has reviewed the proposal and believes it wouldn’t have problems attracting investors.
. 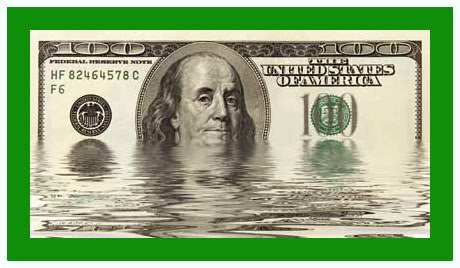 .
And from the Albuquerque Journal
.
Investors refloat proposal to sell water
By John Fleck / Journal Staff Writer
PUBLISHED: Wednesday, July 16, 2014 at 12:05 am

.
A for-profit group hoping to pump New Mexico groundwater to the Rio Grande Valley and sell it to thirsty cities has asked state water managers for a new hearing on a proposal the Office of State Engineer turned down two years ago.
Augustin Plains Ranch LLC, an investment group that includes the owners of a ranch near Datil in the high country west of Socorro, is again proposing to pump groundwater and send it through a pipeline that would follow the Rio Grande north to the Albuquerque metro area.
Proponents of the project say it could provide an important new source of supply for the water-strapped Rio Grande Valley.
“This is a very big step in developing a new and sustainable source of water for New Mexicans for generations to come,” project manager Michel Jichlinski said in a statement announcing the company’s new application.
Critics say it is an illegitimate attempt to privatize what is legally a public resource, and that the new application suffers from the same legal flaw that caused the previous one to be thrown out. In 2012, state Engineer Scott Verhines ruled against the Augustin Plains Ranch proposal because the project’s developers never identified who would use the water, and where.
In a statement explaining his decision, Verhines said Augustin Plains Ranch’s failure to “include specifics as to the end user of the water” was one of the key reasons for the denial. Verhines’ ruling concluded that the state engineer needs to know where and how the water is going to be used in order to consider the request.
The new application includes letters from the city of Rio Rancho saying it is “interested in discussing” the possibility of buying Augustin ranch water. But the city’s letters offer no commitment, and the amount of water Rio Rancho says it needs – “several thousand acre feet of water” – is only a fraction of the 54,000 acre feet per year the company hopes to sell.
Augustin Plains Ranch repeats its prior approach – listing all possible water uses in much of a seven-county area from Socorro to Santa Fe. The ranch, in its filing with the state, said it hopes to win preliminary approval for the application before specifying who will use the water, and where.
That drew quick criticism from attorney Bruce Frederick with the New Mexico Environmental Law Center in Santa Fe, who represented a number of the 248 people who protested the group’s previous application.
“The application is a public relations piece and suffers from the same basic legal deficiency as the prior applications – the ranch has again failed to identify any actual place or purpose of use of water,” Frederick told the Journal.
In parallel to its new application, Augustin Ranch also is in court appealing Verhines’ denial of the previous application. Project spokeswoman Whitney Waite said no decision has been made about whether that appeal will continue.
“How we’re going to handle the appeal is still under review,” Waite said. Oral arguments in the case are scheduled to be heard in August by New Mexico Court of Appeals.

.
Posted by Matt Middleton at 7:13 AM No comments: