At a time of year that is critical for building New Mexico’s
water supply, seasonal snowstorms have largely bypassed
New Mexico since the third week of December,
and the new forecast suggests more of the same.
Albuquerque is on track for one of its longest winter season
rainless or snowless streaks on record, according to the
National Weather Service.

Snowpack around the state ranged from three quarters of average
in the Sangre de Cristos to less than half in the headwaters
of the Gila River in southwestern New Mexico. Federal
officials met with local water agencies this week to discuss
possible first-ever shortfalls of water for the San Juan-Chama Project,
which imports San Juan River water for use in the
Rio Grande Basin. And on the Rio Grande itself,
the January forecast calls for 59 percent of normal flow into
Elephant Butte Reservoir in southern New Mexico.
.
Read the entire article here:
http://www.abqjournal.com/338372/news/prepare-drought-plans-forecasters-warn-nm-communities.html

.
The video below is basically a prayer for snow
(this is the Southwest),
and a little more.  Our "PRAY FOR SNOW" efforts
are ongoing this season, so that we might see
the drought recede here in New Mexico, and
get people to understand that this approach
isn't superstition or folly at all, but something
serious and real.  The Land of Enchantment,
as New Mexico is called, needs a snowpack -
so the rivers might run this Spring,
and the water speculators might be silenced,
at least for a while.
Most of the images are from the Alamo Navajo Reservation
in west-central New Mexico.
The music is "Quiet Season" by
Robert Mirabal from Taos Pueblo.
.
.
For the benefit of those who use "Google Translate"
we're here posting the text that is in the video.
.
A Winter Prayer
.
From Isaiah
Chapter 55
Verse 10
.
"For as the rains
come down,
and the snow
from heaven
.
and does not
go back again,
but gives water
to the earth,
.
and makes it fertile,
giving seed
to the sower,
and bread to
the hungry."
***
O Lord, please bless
our land with snow
this winter,
.
that we may oversome
the dangers and perils
of further drought,
.
and learn something
about the intelligent
conservation and use
of water,
.
that gift of your
universe that
sustains our land,
our animals,
and ourselves.
.
Water our country
with your
winter snows,
.
and water our souls
with the river of
living water
that Jesus
promised.
.
We ask your blessing -
snow on us,
purify us,
and save us.
Amen
. 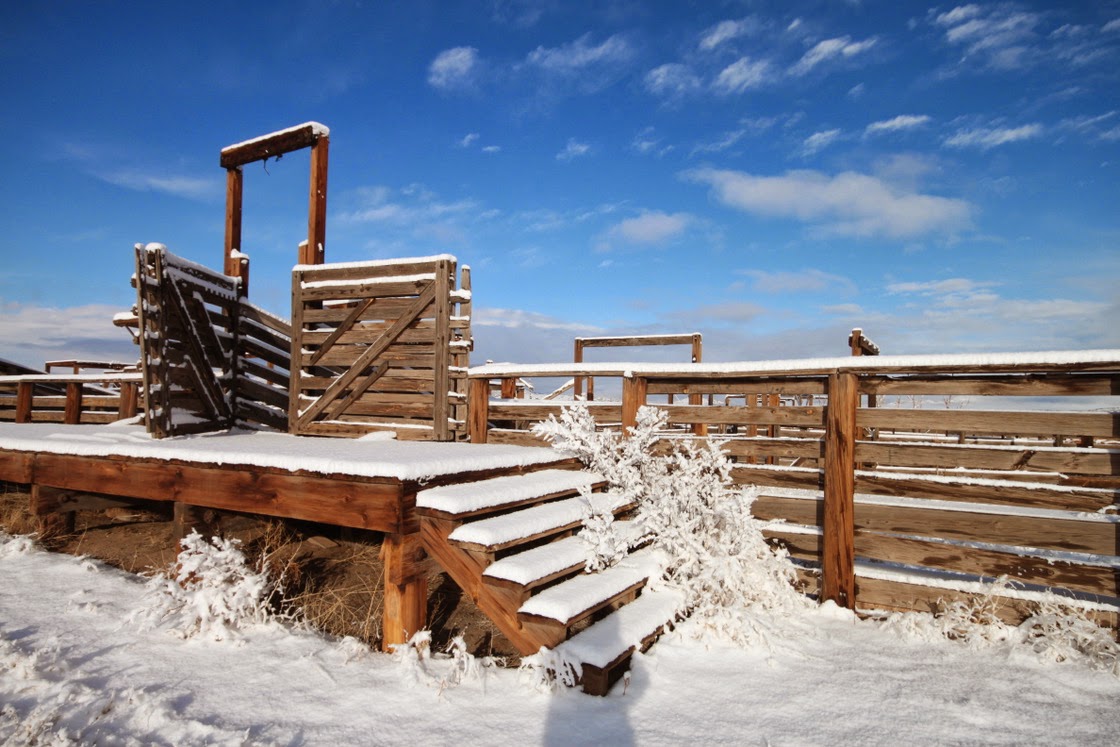 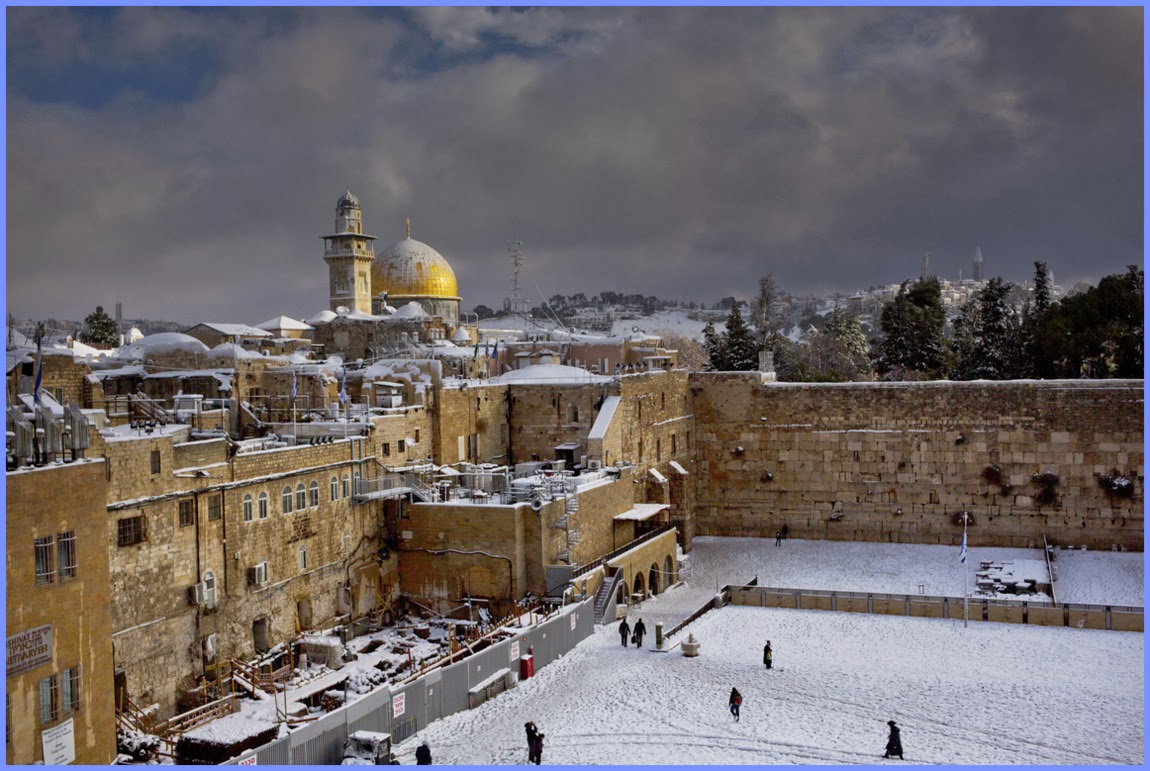 .
Does praying for rain or snow work?
Well, before I would even try to answer that,
I'd suggest you first take a look at the article
below from THE TIMES OF ISRAEL.
.

Rabbis: You can stop praying for rain now

Jews now encouraged to say prayer of thanks for the deluge

.
By Gavriel FiskeDecember 12, 2013, 3:24 pm
.
Now that Israel’s winter has begun in earnest,
with a major storm and snow Wednesday and
Thursday, Jews around the world should stop
saying the special prayer for rain they were
asked to utter last week, the Chief Rabbinate
said.
.
This early winter was one of the driest on

record, even by the parched standards of the

region, and so last Wednesday, December 4,

into their daily supplications and to recite 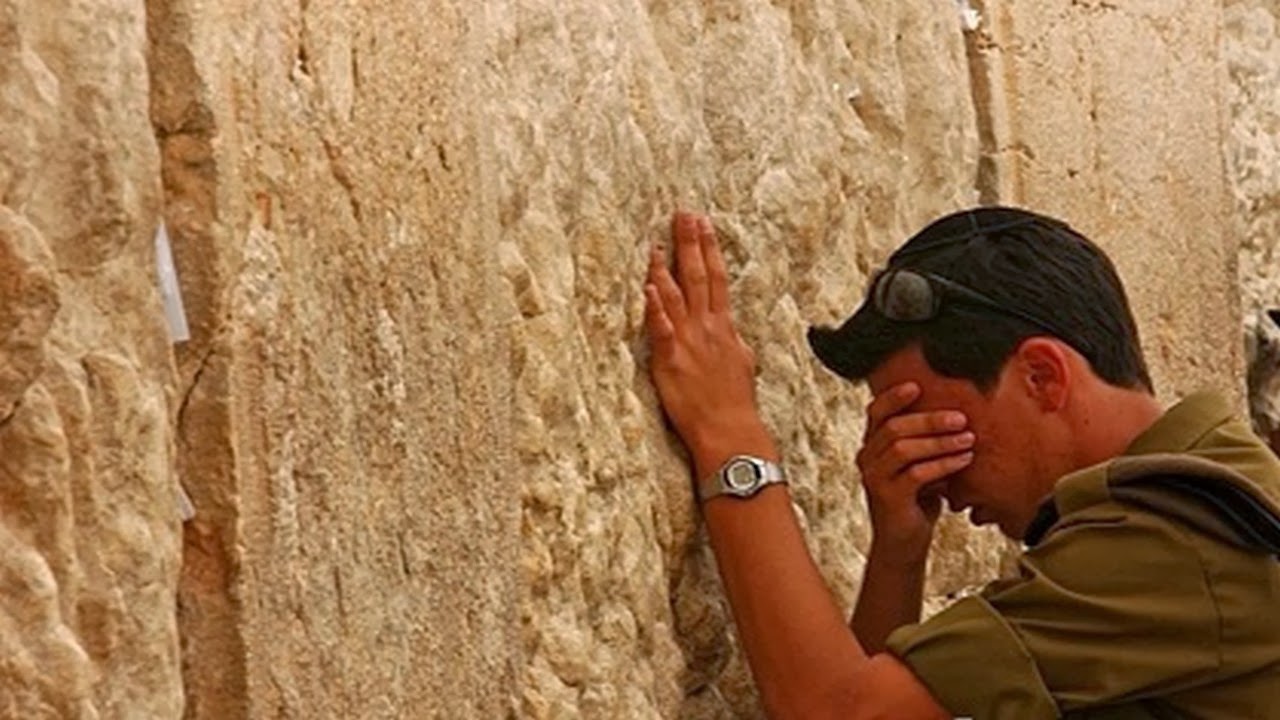 .
Soon after the rabbis’ prayer request was
made, meteorological data indicated that rain
was headed to Israel. Since its arrival, the
rabbis have asked the public to cease saying the
extra prayer, and instead to insert
a thanksgiving prayer for rain —
a prayer that is
“a little modern, from around 400 years ago,”
Chief Rabbinate spokesman Ziv Maor
told The Times of Israel on Thursday.
A planned prayer rally at the Western Wall,
called for last Thursday, was called off because
it was already clear that the rains
were imminent, he added. The first major rain
of the winter struck the country that same day.
.
This Wednesday-Thursday has seen Israel
in the grip of a rain-, wind- and snowstorm
that was expected to last through the weekend.
Schools were closed and public transportation
disrupted Thursday as snow fell on Mount
Hermon, the Golan Heights, Safed, and
Jerusalem and its surrounding higher-altitude
areas.
.
. 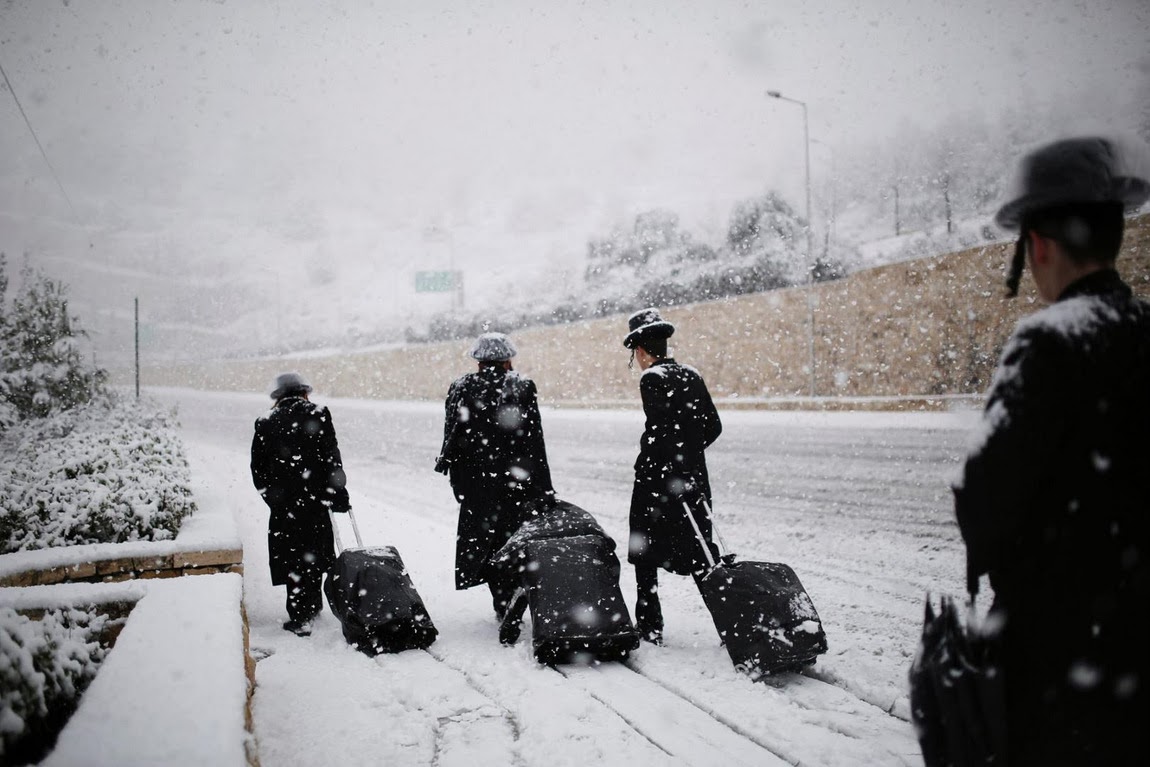 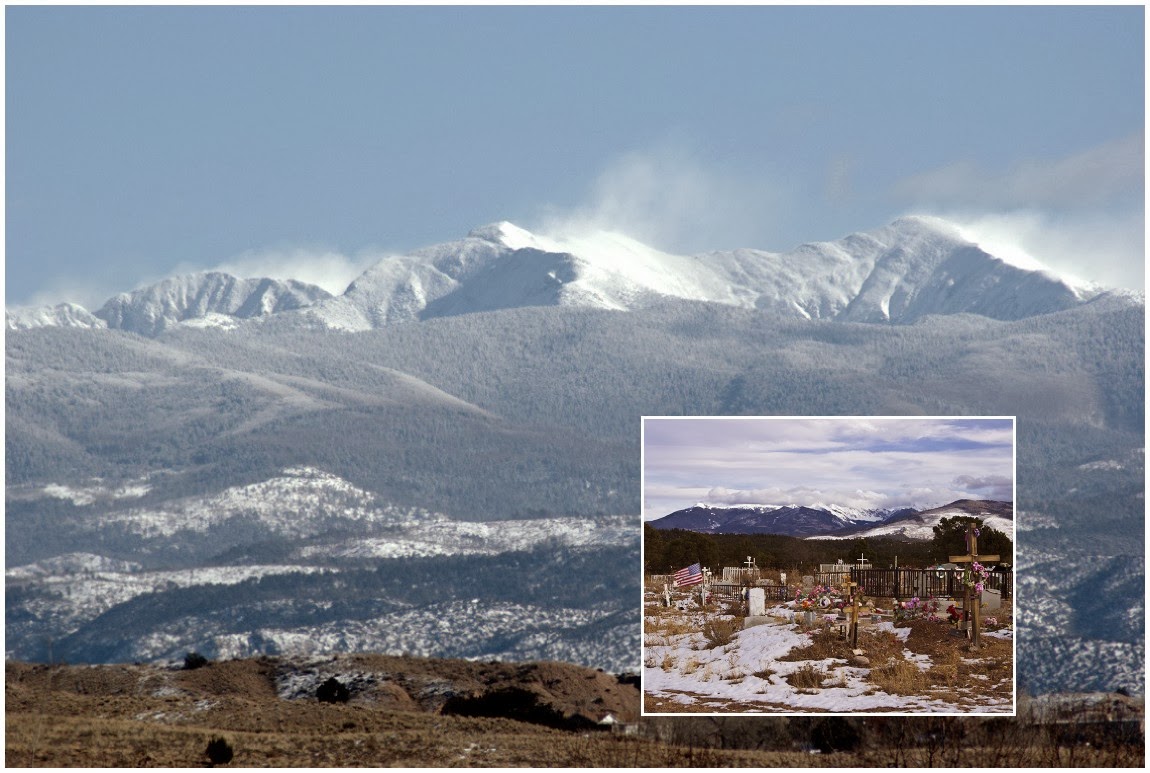 .
Above - The Truchas Peaks in northern New Mexico, part
of the Sangre de Cristo (Blood of Christ) Mountain Range.
Insert - The village cemetery at Truchas, NM .
These mountains, running from north of Santa Fe across the
state line into Colorado, are a major source of runoff for the
Rio Grande.
.
From the Las Cruces Sun-News

Las Cruces - After what Doña Ana County irrigators said was a mediocre start to the winter, snowpack levels in southern Colorado and northern New Mexico will be closely watched in the first quarter of 2014.
That's after a historic low irrigation year in 2013.
Phil King, water engineer for the Elephant Butte Irrigation District, said the season is shaping up better than a year ago, "which isn't saying much," because last year was a record low irrigation year. But neither is the forecast stellar.
"It's certainly not going to be a good one," he said. "It won't be anything close to a full supply."
A federal snowpack report Monday showed that the Upper Rio Grande Basin -- a key water source for the Rio Grande -- sat at about 90 percent of normal for this point in the season.
And while that might seem positive, experts said the figure is on a downward trend.
After the season began Oct. 1, there was decent snowfall in the watershed, experts said. But that changed.
"It was actually up over 100 percent (of normal) through early December, but then it quit snowing," King said.
Wayne Sleep, hydrologic technician for the Natural Resources Conservation Service, said the snowfall "pretty well shut down in December."
.
Read the entire article here:
http://www.lcsun-news.com/las_cruces-news/ci_24818510/mediocre-snowpack-shapes-up-rio-grande-headquarters-expert
.

.
Above - The Sangre de Cristo Mountain Range in Colorado.
The very headwaters are further west, in the San Juan Mountains (below).
. 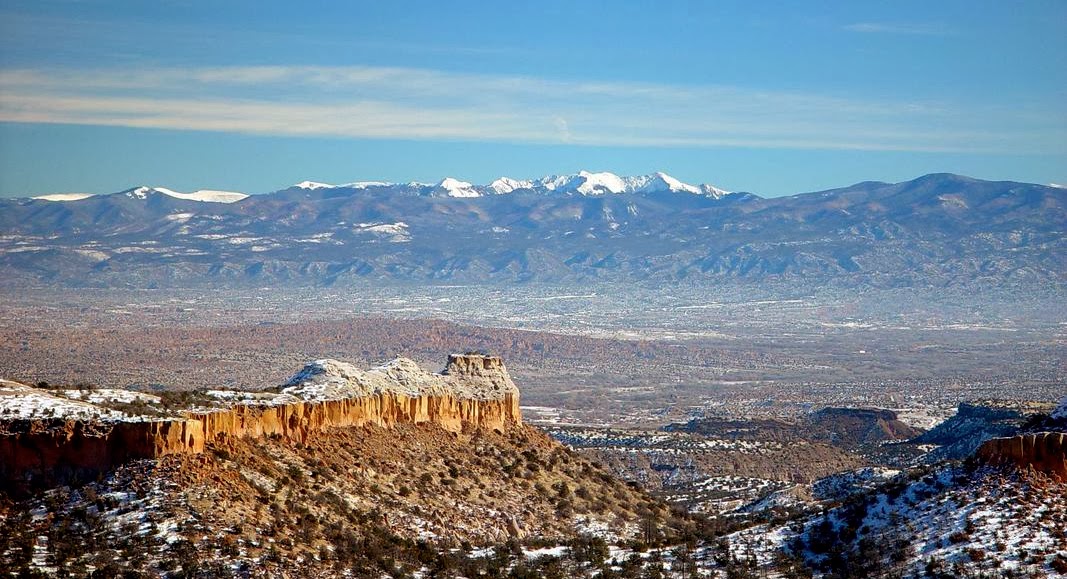 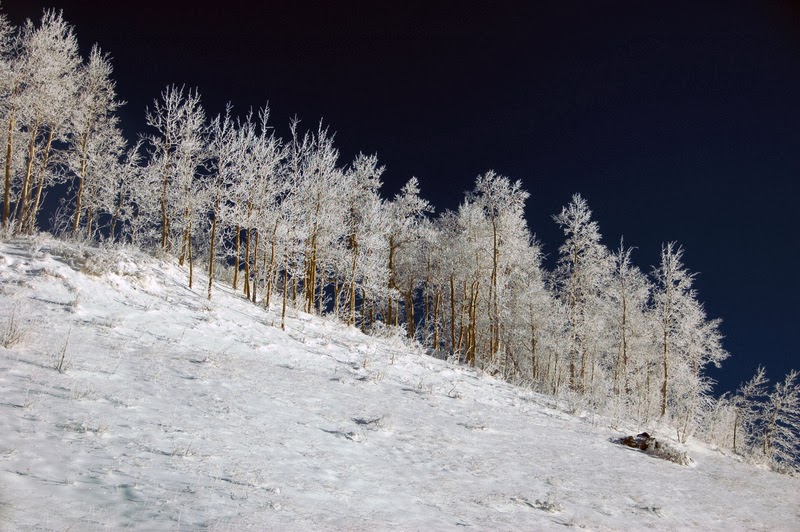 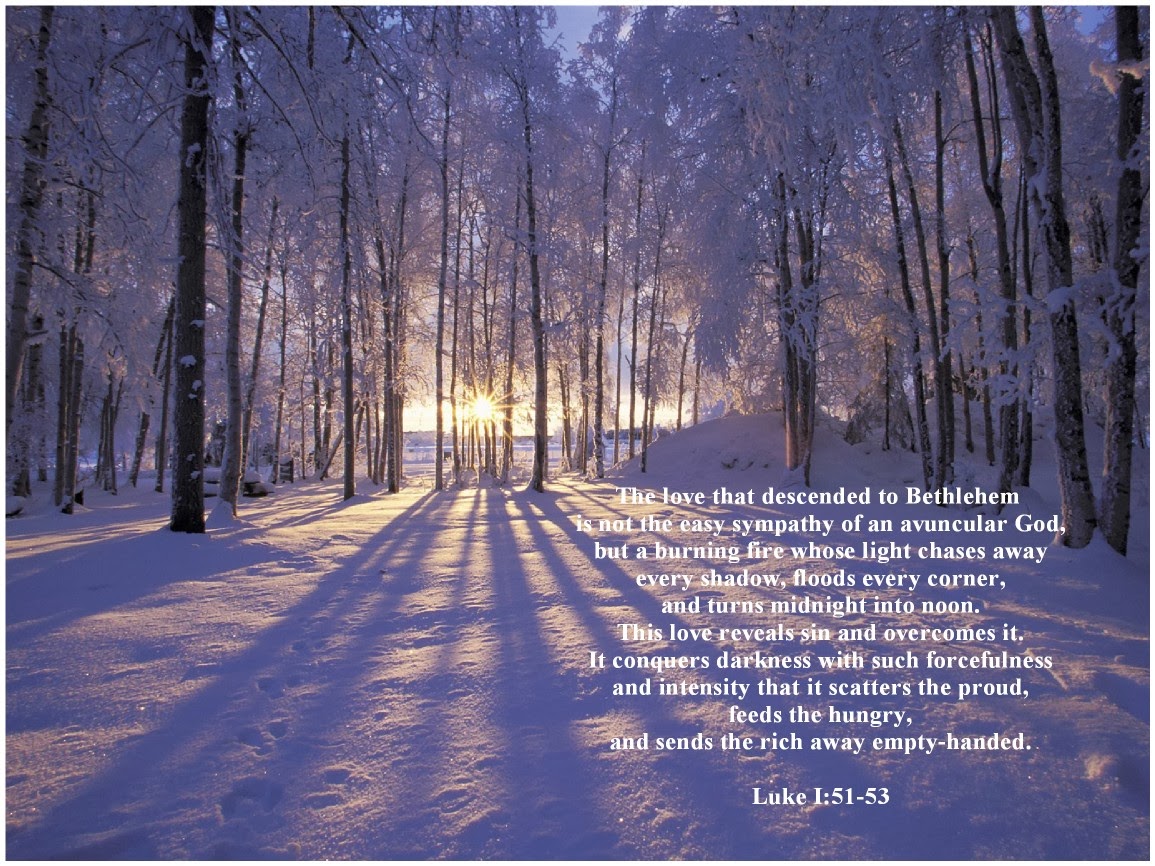 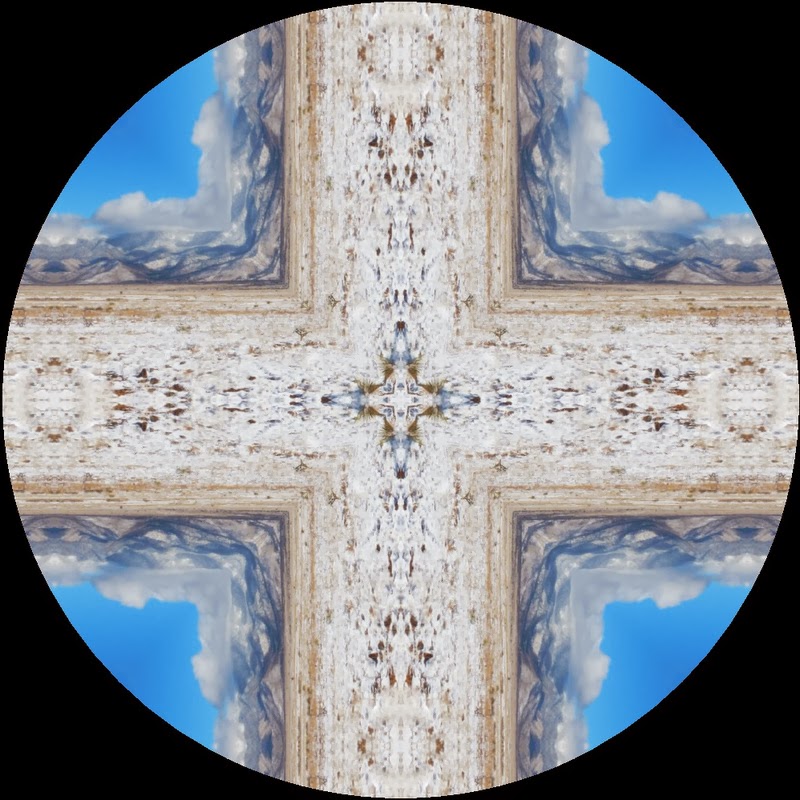 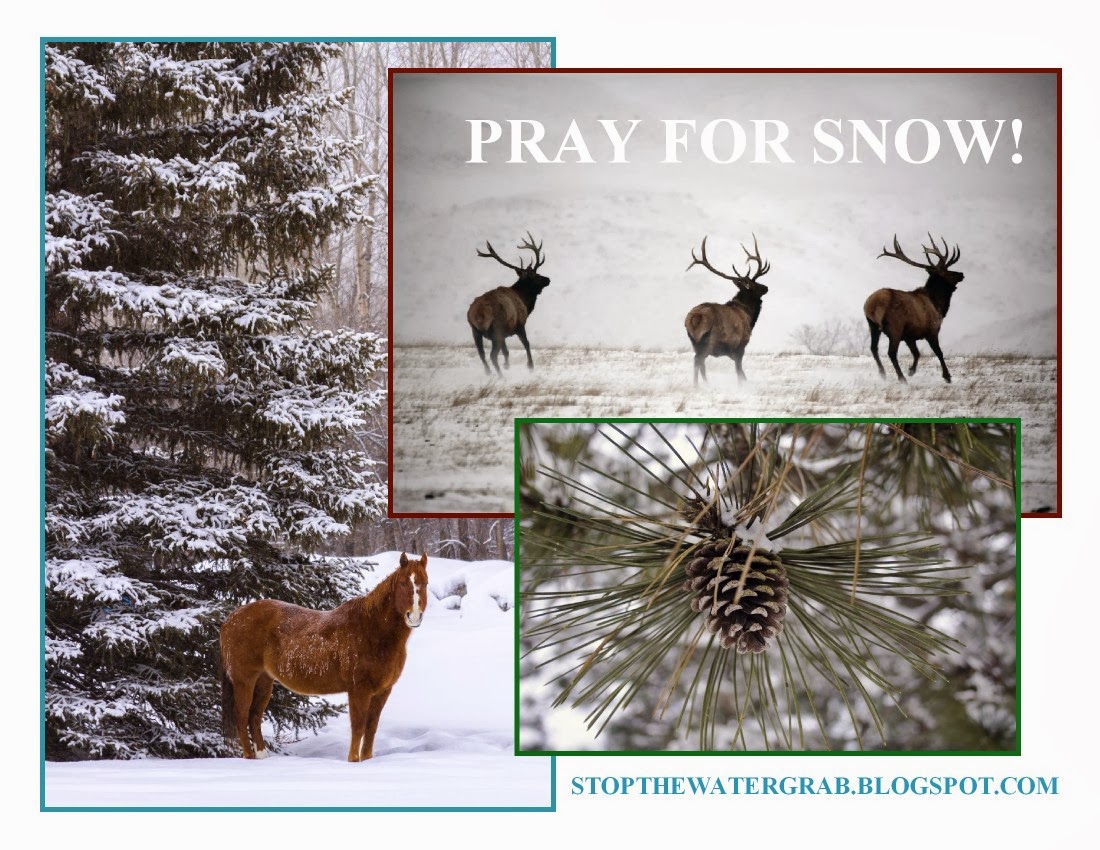 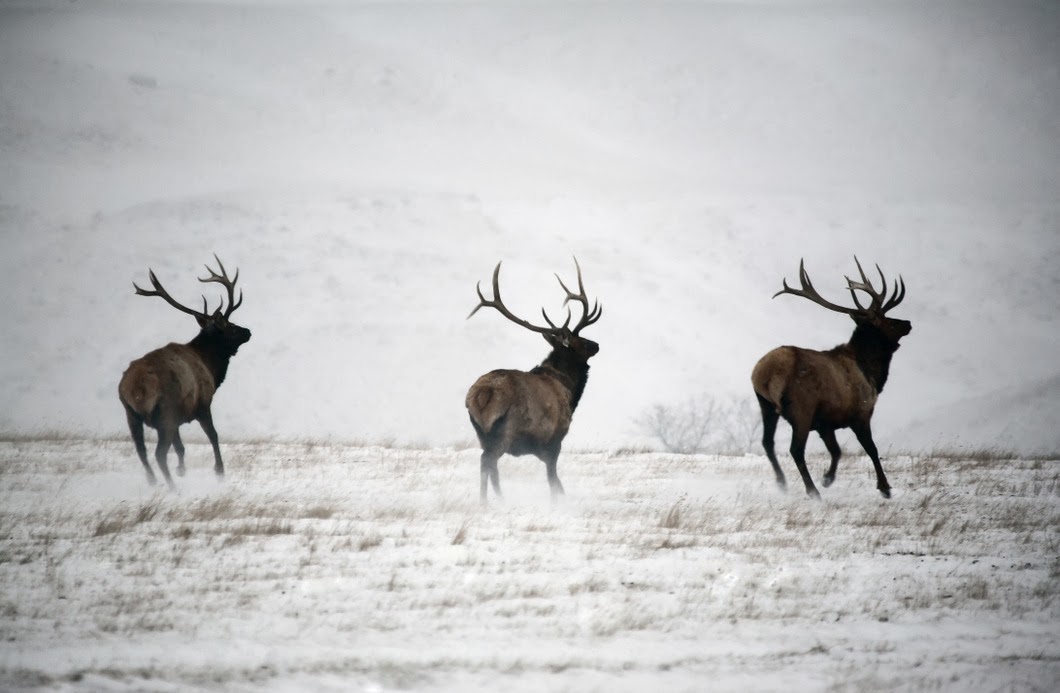 .
Now we'll begin uploading material that we're calling
a "highlights" list of blog posts over the past year -
probably a half-dozen - and WHAT IT WAS about each
post that made them stick out among the three-dozen+
that were published over the last twelve months.
.

.
Number One
TELL THE GUMBA NO AGUA!
January 9, 2013
.
Here we began the process of looking into WHO
these Italian folks, the father-son duet of Bruno
and Vittorio Modena, actually are.  Everything
we found out about them raised flags.  Everything
we found out about them looked either suspicious,
or worse.
.
http://stopthewatergrab.blogspot.com/2013/01/tell-gumba-no-aqua.html
.

.
Number Two
COME DANCE & SEND A SHOUT TO SUSANA!
January 17, 2013
.
It seemed important to "do something" right away
for general issue-awareness and involvement.
We're all in this together, as New Mexicans, and
we needed to share info and educate ourselves.
This event at Magdalena's Golden Spur Saloon
served just that purpose, and was a lot of fun besides -
and dozens of people sent messages to the
Governor's office via the laptops we brought
for the task.  The music and food were both
terrific, and we were able to garner $1500 for
the San Augustin Water Coalition war chest.
.
http://stopthewatergrab.blogspot.com/2013/01/come-dance-send-shout-to-susana.html
. 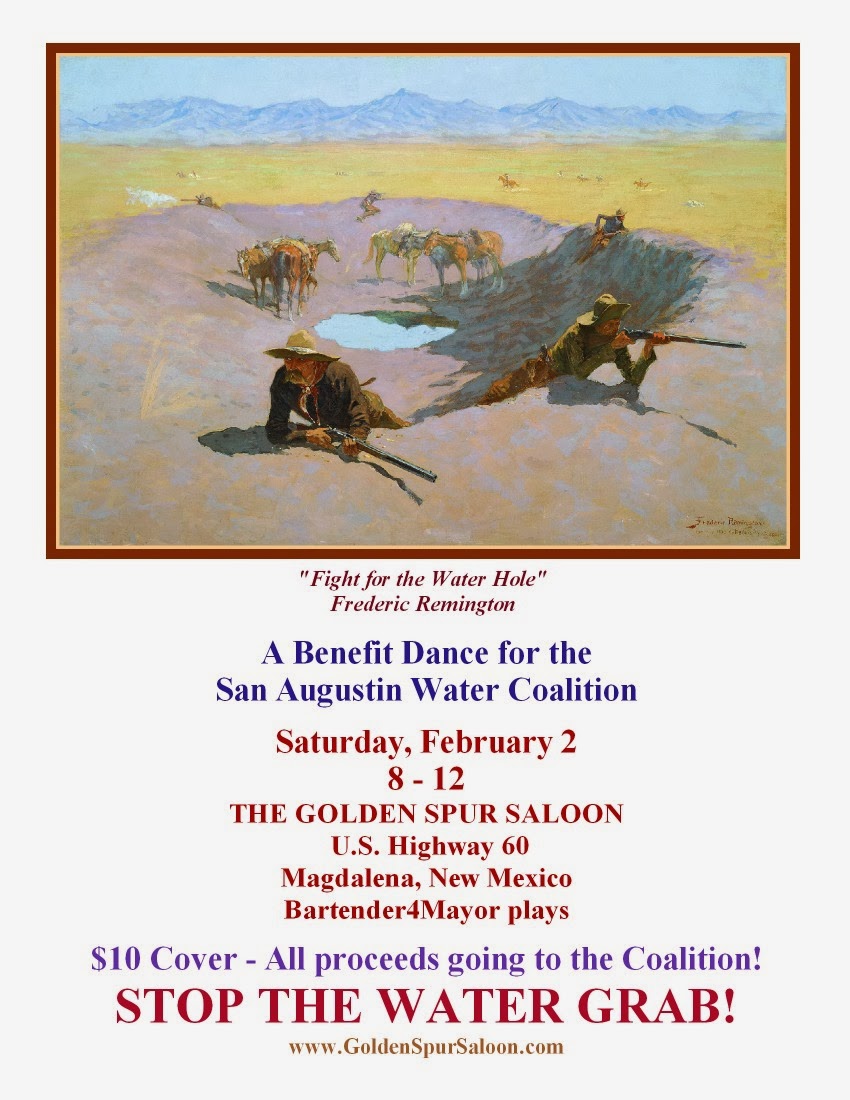 .
Number Three
WHO'S MICHEL JICHLINSKI?  A THIEF?
February 17, 2013
.
This got the ball rolling on finding out who the
new "Project Director" for the foreigners was.
This character turned out to be the former
President and CEO for a federal contractor that
got hit by the feds with the largest fine ever for
a war-time contractor.  Jichlinski ran a company
that the whistleblower called "a culture of fraud."
Our suspicions that the foreigners were probably
mob-connected on a serious level seemed not just
possible, but probable, when one considered what
kind of people they were hiring to represent them.
Stealing millions of taxpayer dollars on jobs in
war zones, and a close familiarity with bribery,
are unique references on a resume.
.
http://stopthewatergrab.blogspot.com/2013/02/2011-01-01.html                                                       . 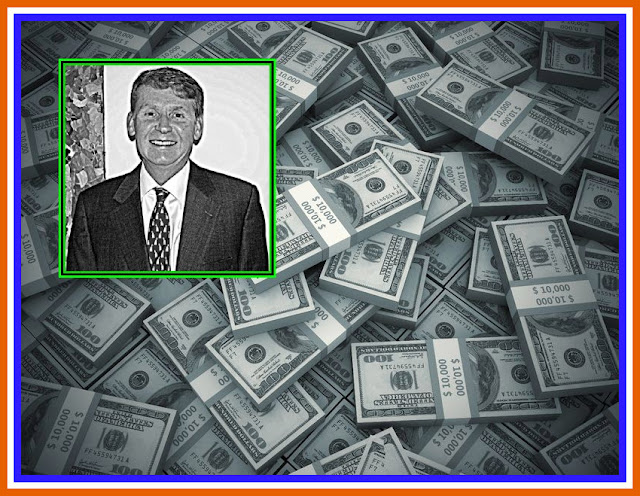 .
Number Four
THE RIO GRANDE
April 23, 2013
.
This has been the biggest draw that the blog
has had for new "hits" - week after week.
The Rio Grande is a major "player" in southwestern
water realities, and is a fascinating piece of southwestern
geography - physically, historically, culturally.
This post has an excerpt from Paul Horgan's
GREAT RIVER, a Pulitzer Prize bit of writing,
info on the "water war" between New Mexico and Texas,
good music, great photos, and much more.
.
http://stopthewatergrab.blogspot.com/2013/04/the-rio-grande.html
. 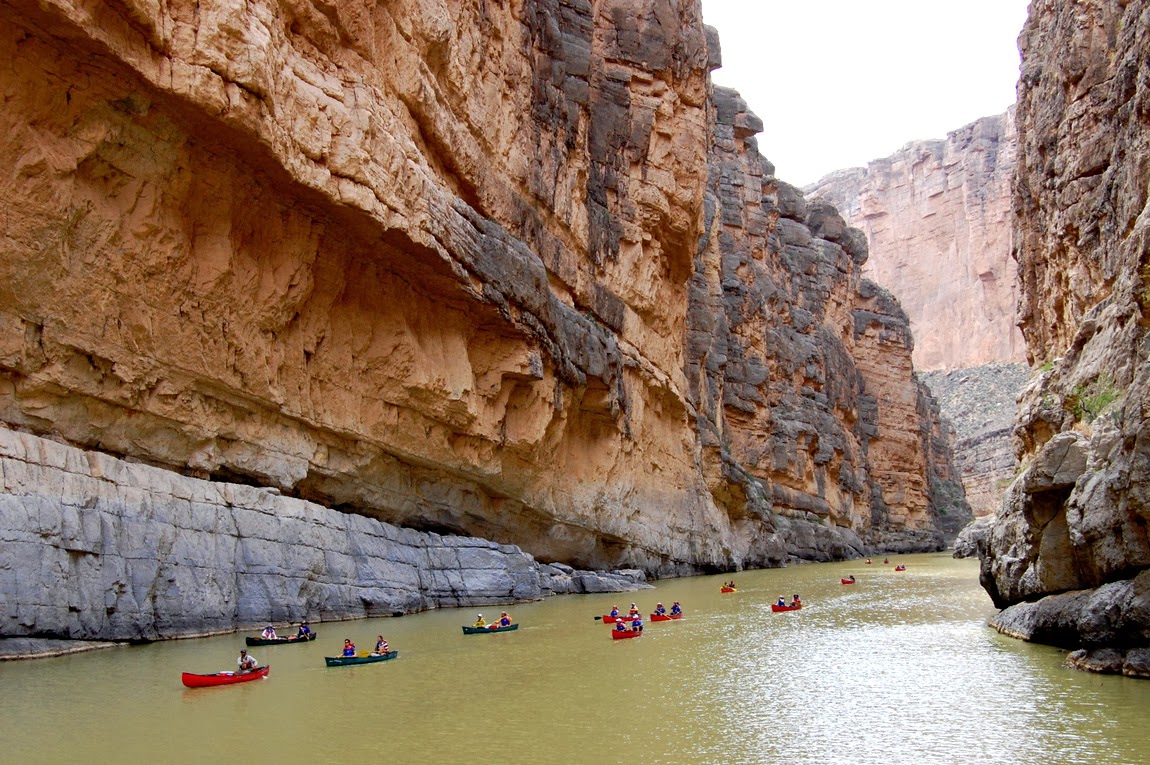 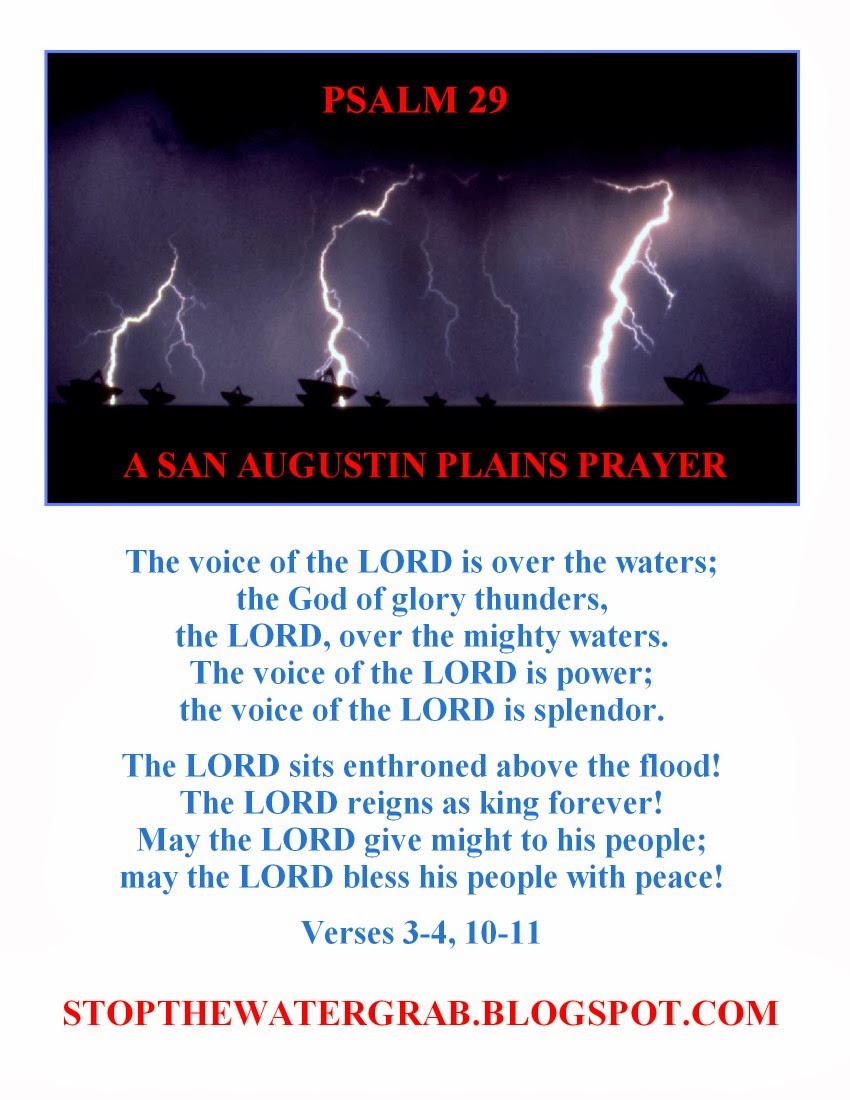 .
Number Six
WHY GOD MADE BUMPER STICKERS
October 13, 2013
.
Danny Monette, a Socorro County Commissioner,
has been a strong supporter of our efforts.
His story about how he's been "talking the
issue" with folks from around the state,
and the west in general, with one of our
bumper stickers getting the conversation rolling,
is darned interesting.
This all says something about the power of
a good idea, or maybe the power of the truth.
Neat stuff.
.
http://stopthewatergrab.blogspot.com/2013/10/why-god-made-bumper-stickers.html
. 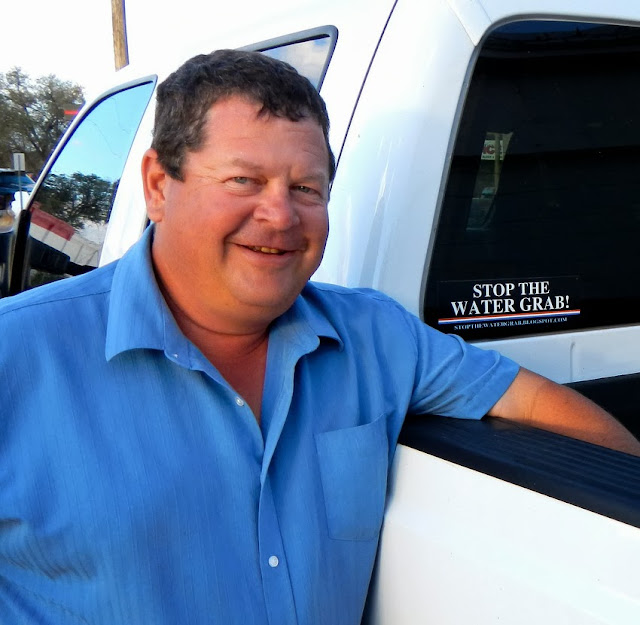 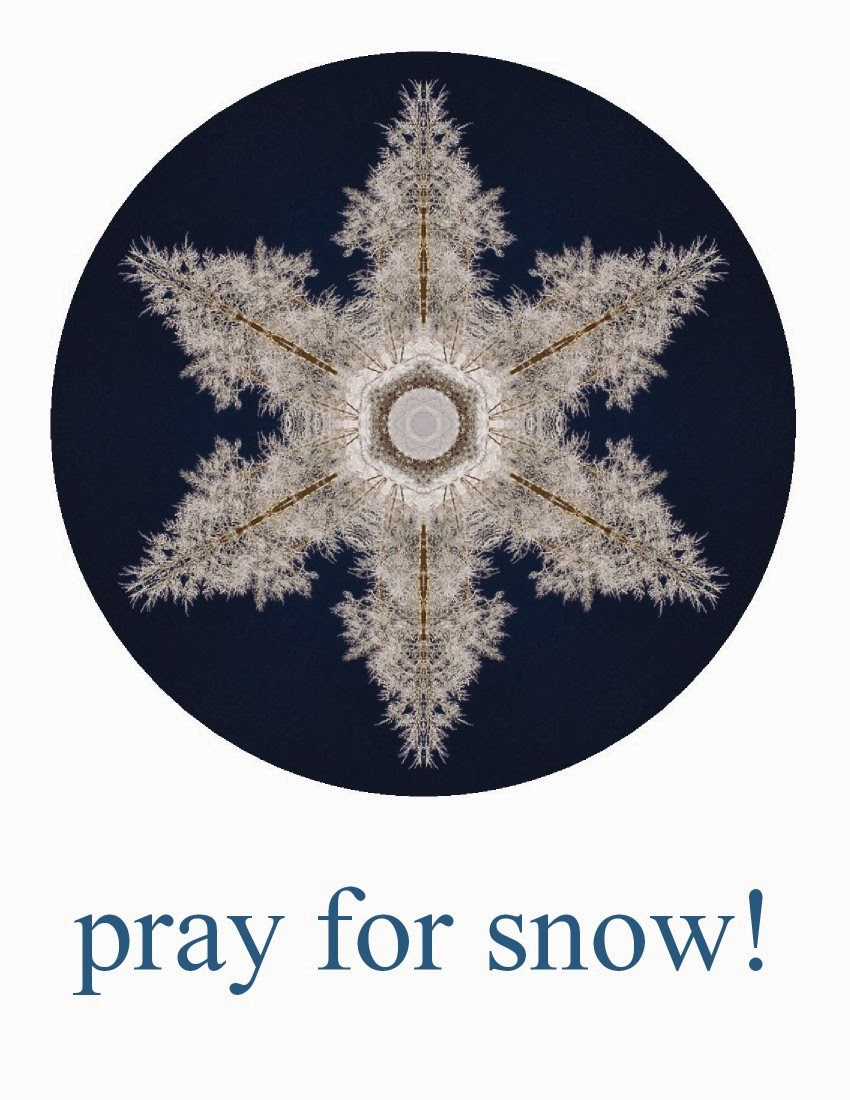