SAY, HOW DID THE PRAYIN' FOR RAIN WORK OUT? 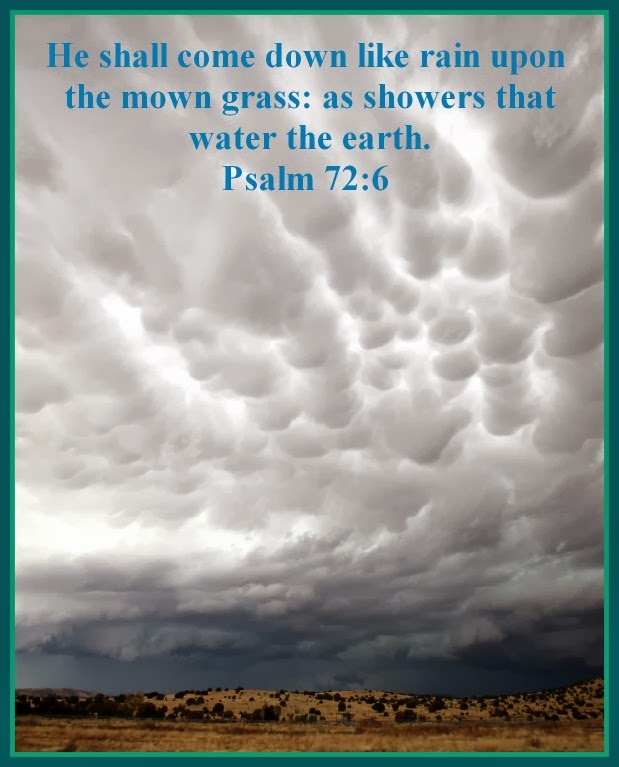 .
We kept a small jpeg in the upper-right
corner of the layout for some time, though June 15
was long past.  But having it up begs the question.
How did things go?
. 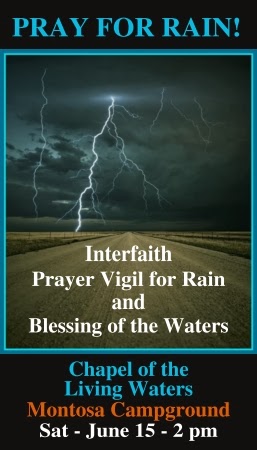 .
Well, let's start by a little brief history.
Last March 3, we put together some photos,
prayers, and music for a post we titled:
"PAUSE FOR A PRAYER FOR RAIN."
We've gotten a lot of hits on it.
.
Later in April we started promoting the
"PRAYER VIGIL FOR RAIN &
BLESSING OF THE WATERS"
we held out at Montosa Ranch in mid-June,
at the Chapel of the Living Waters,
courtesy of B.W. Cox.
. 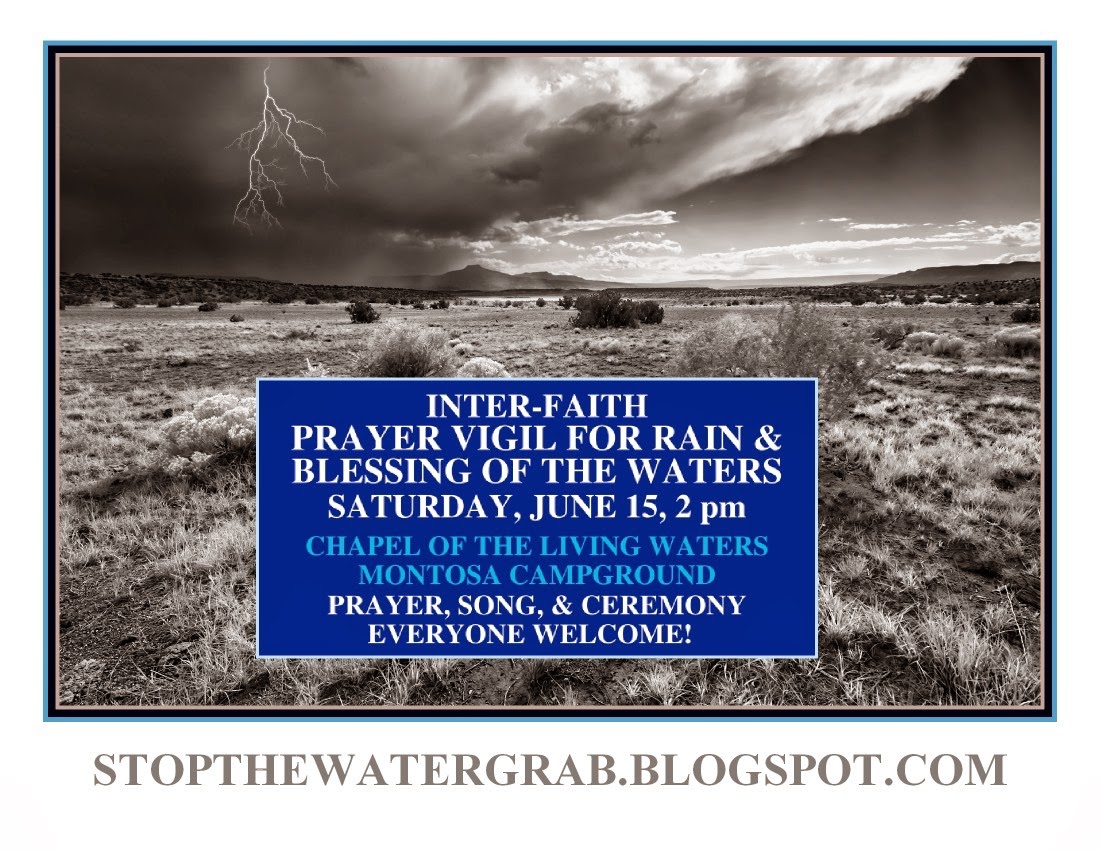 .
Of course if something's a good idea,
it's bound to pop up all over the place.
We weren't the only outfit in the state
doing something like this.
There were ceremonies and prayer services
for rain in five or six places.
Below, participants in a Prayer for Rain
service in Bernalillo, New Mexico this past Spring.
. 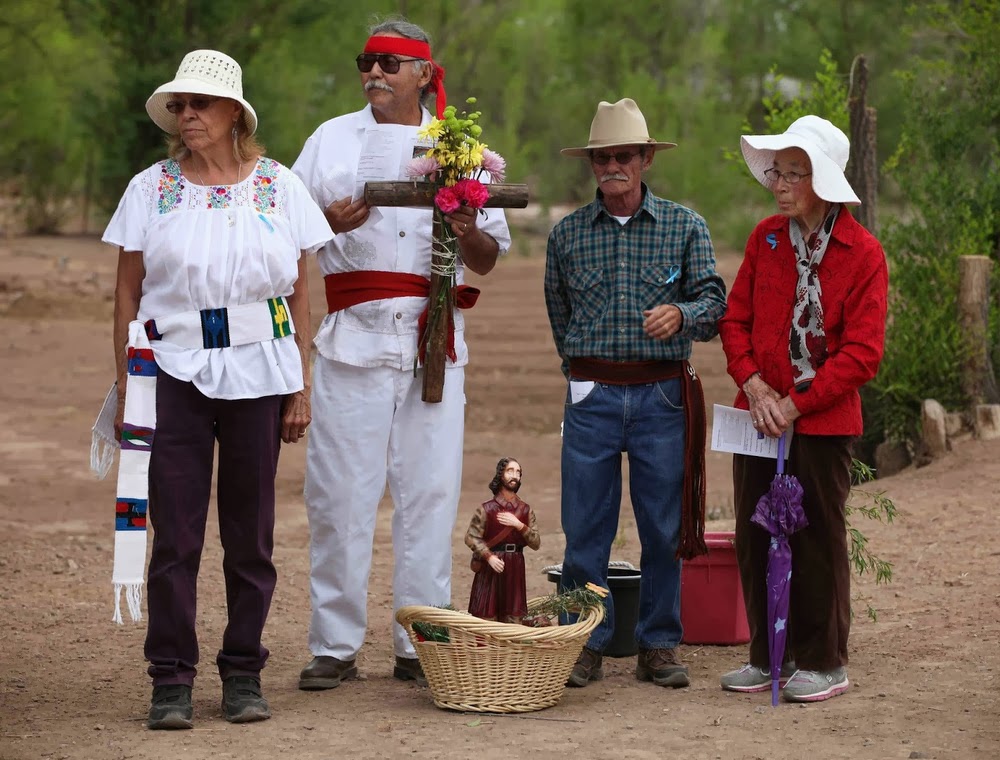 .
If you'd like to check out the post, -
PAUSE FOR A PRAYER FOR RAIN -
to see how this all started,
you might want to look, and listen
to the music while you're there.
See it here:
http://stopthewatergrab.blogspot.com/2013/03/pause-for-prayer.html
.
Here's the approximate state of affairs as far
as the water goes - last April into mid-June.
Things were looking bleak.
. 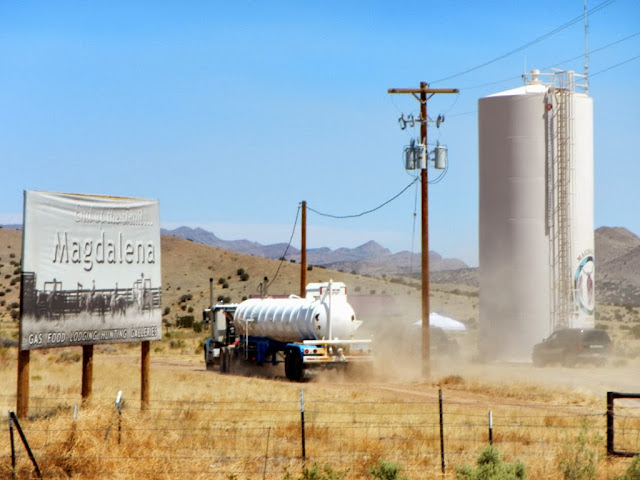 .
Magdalena ran into water trouble right about this time,
but the "coincidence" of drought and the well problems
turned out to be just that, a coincidence.
It turns out the village difficulties
were due to poor management, stupidity,
incompetence....whatever your favorite term is.
Governor Susana Martinez called it
"forty-five years of mismanagement."
Our law enforcement guys ended up having to
take the initiative and do a lot of stuff
that wasn't their responsibility.
But these guys "step up" to the occasion
when duty calls, unlike some around here.
Thanks a lot gentlemen.  We owe ya'.
. 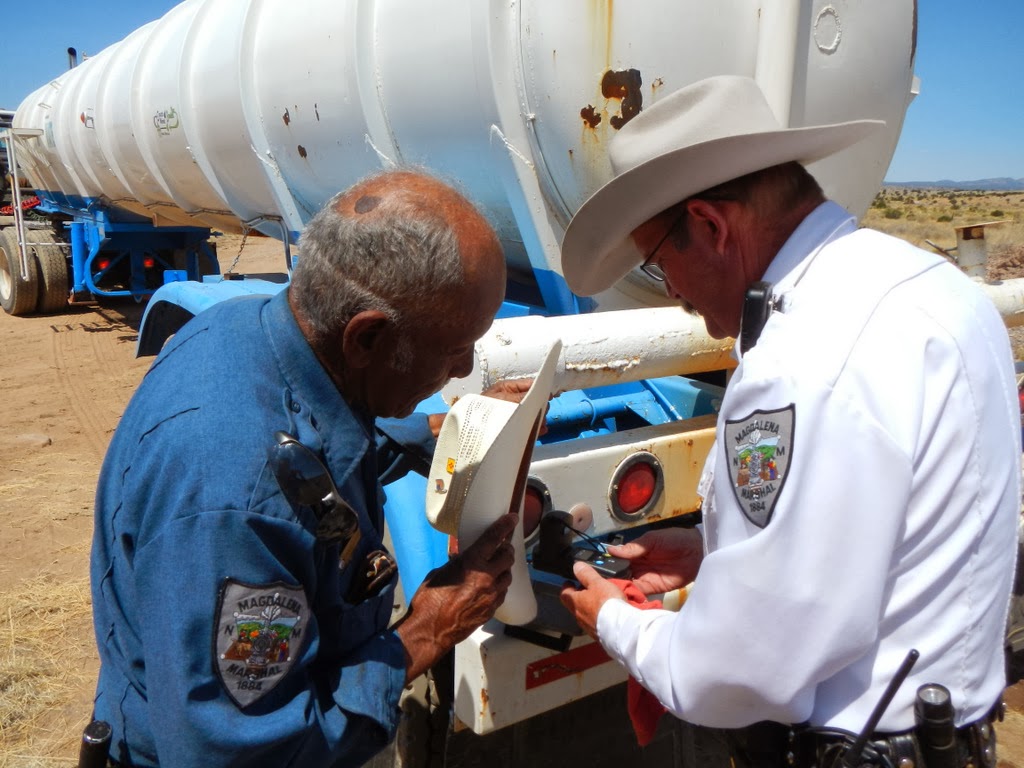 .
Howevah....it was definitely interesting stuff for the media.
Especially since here we were PRAYING for rain.
Below - the NBC News crew at work, and then a brief video
from KOAT, Channel 7, in Albuquerque.
. 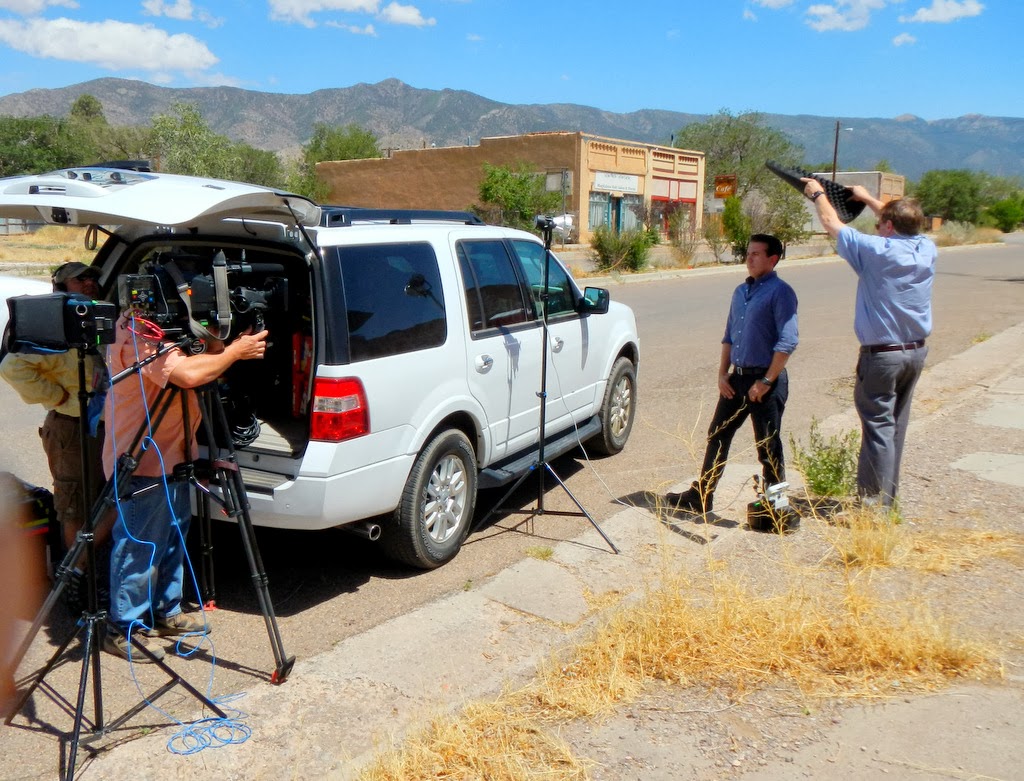 .
.
The water crisis caught the attention of a
lot of people, among them Briane Dennison of
the Albuquerque Police Department Chaplains Unit.
They organized a drive to collect agua and
A LOT of water was donated and brought to the Village.
In a way, prayers were being answered already.
No, it wasn't rain.  It was water.  Drinking water.
Something that was needed in large quantity.
.
There's good people out there, no matter
what kind of mess Albuquerque is.
Here's a link to a neat little story that aired
on KOAT (Channel 7) Albuquerque
about the water drive:
http://www.koat.com/news/new-mexico/albuquerque/apd-seeks-water-donations-for-magdalena/-/9153728/20633084/-/14kqlwm/-/index.html
. 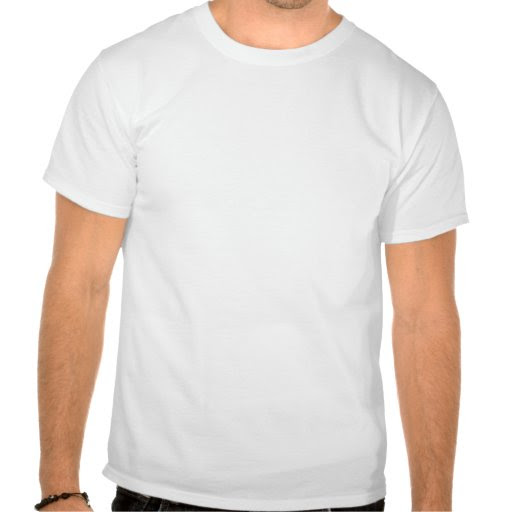 .
It’s Albuquerque to the rescue for a little New Mexico town where the well ran dry three weeks ago. City cops delivered thousands of gallons of water to the Socorro County village of Magdalena Friday morning.
.
Village residents worked side by side with police officers, unloading pallets of bottled water. Albuquerque residents and businesses made the donations, along with Walgreens, Walmart and Smith’s, which also provided the drop-off locations. ABF Trucking, Albuquerque Moving, U-Haul and the city Parks and Recreation Department donated trucks and drivers.
.
“It’s pretty overwhelming, the support we’ve had from outside the community,” said Magdalena village blacksmith Z.W. Farnsworth. “It’s nice to see that people step up and help each other out. It’s something we need to do more of.”
. 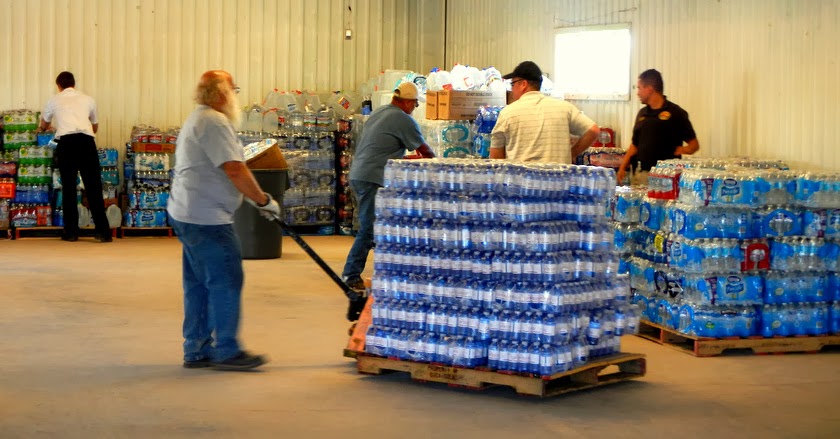 .
In under two hours the big job was done and the cops and truck drivers dug into enchiladas and green chile cheese burgers at local restaurants – on the house.
“I was amazed when I saw all those big trucks coming in with all this water and unloading and helping us,” said village mayor Sandy Julian.
“Albuquerque, I thank you from the bottom of my heart,
and the people of the village of Magdalena thank you.”
.
“It’s just great helping your neighbor,” said police chaplain Briane Dennision.
“We get to do that every day in the city of Albuquerque, but we have to come and help our neighbors in the state of New Mexico. It was just a great effort on everybody’s part.
How much water? Don’t ask. Nobody knows, since the containers are different sizes.
But it’s a lot!
. 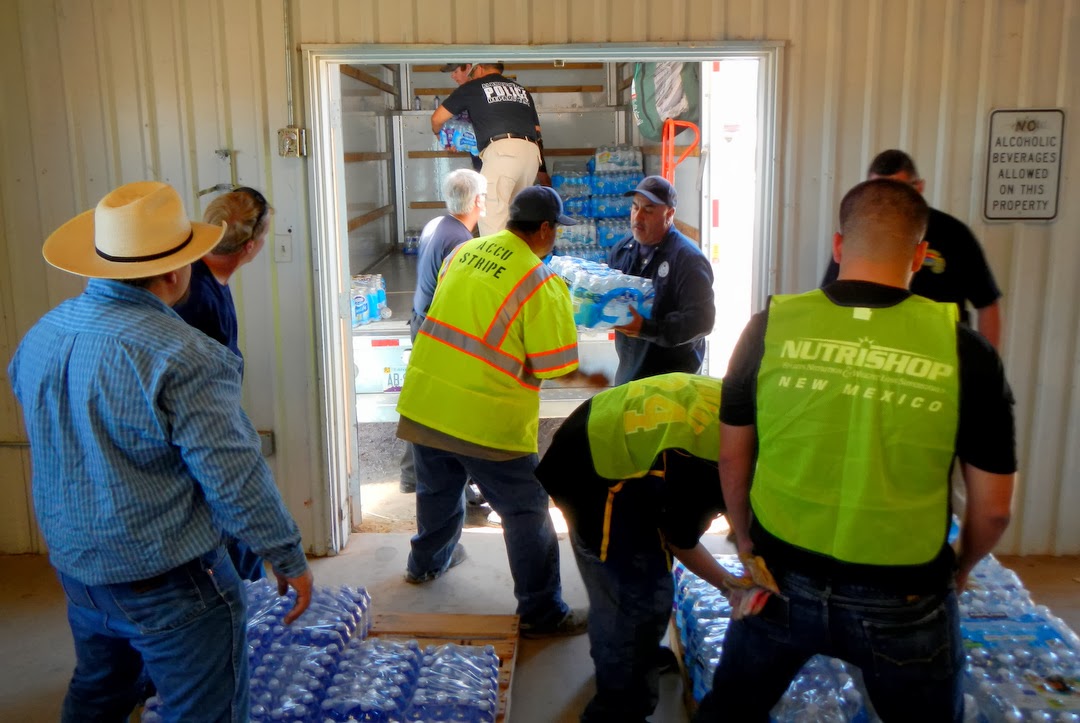 .
Update
The last of the bottled water was distributed
on October 16.  The wells are still having some issues,
and many people are still using bottled water.
But we need to send a huge THANKS to
Briane Dennison, the Chaplain from APD
who put this all in motion, and the
people from Albuquerque, Los Lunas, Belen, Socorro,
and from across the state who either donated
water (or $$$ for the drive to purchase water).
Thanks a lot!  Gracias a todos!
God Bless you all!
*********
.
And of course the Project Director for the foreigners,
Michel Jichlinski, was basically sounding like
Chicken Little in the local paper during all of this.
"The sky is falling!!!
Drought....Drought!!!  No water!!!
Your well's DRY!!!!
What will you do???
You need our project!!!
We could have water for you!!!"
.

Well, that's a matter of opinion.
Our well wasn't actually dry.
As the "Guv" said - "mismanagement."
.
It should be noted - corporate donors and
private businesses got involved with the water drive -
from Walmart and Home Depot,
to Daniels Funeral Home and the
Water & Ice Store in Socorro.
But there was NO assistance, as far as is known,
from the foreign investors -
Augustin Plains Ranch LLC.
Common sense tells you if they had been generous,
and gracious about it,
it could have been a point in their favor.
True.
Good PR.
But these guys have a history of everything from
not paying their contractors, to falling behind
on land taxes.
You expect the generosity of a neighbor from
the likes of these???
Dream on.
.
If they'd have done anything they would have had
the PR flacks in full gear - TV, print, radio and web.
But generosity is NOT what these guys are about.
It's pure self-interest and misguided thinking.
It's dangerous.
.
But, here's how the drought monitor looked
at the beginning of October.
. 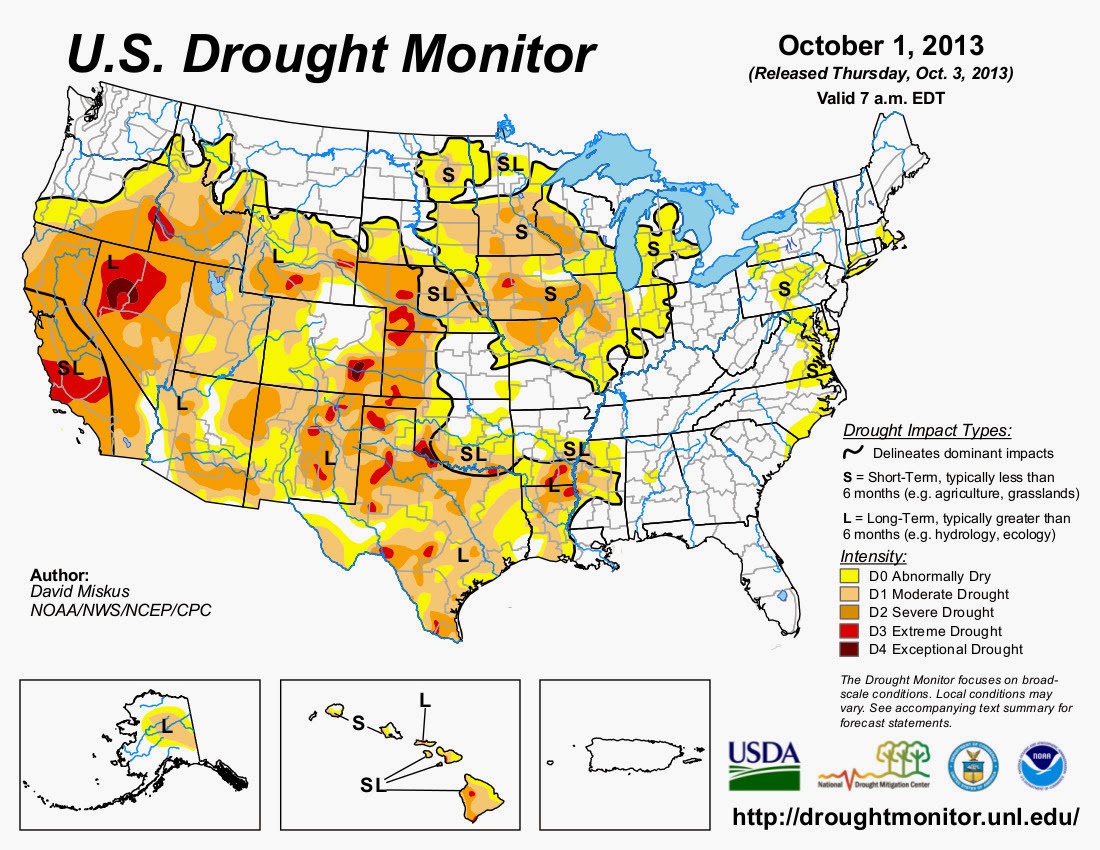 .
We got a short rain in Magdalena, and the area,
later the afternoon of June 15, after the ceremony
at Montosa, and then it stopped.
And then it started up around July 1...and it rained,
and rained, off and on, across the state, in
various locales, for weeks...and weeks.
It was a little spotty in some areas, some weeks,
but most of Catron and Socorro Counties got a
lot of rain, as did most of southwestern New Mexico.
Generally, most of the state got a big boost.
.
In just three months, exceptional drought - the
worst category -  disappeared from
New Mexico drought maps.
The state also marked its second wettest
September on record with average
precipitation of more than 4 inches.
. .
Yes, there were a few minor flooding issues,
but they were minor.  In the big picture, we did well.
There's fat cattle now, munching and laying
around all over the place.  FAT.
We'll get a lot more up here, including material
from June 15 - and we have some surprises.
.
Below is a short video that was part of
our ceremony at Montosa.  Someone wanted
to participate, but had to work, and so
we got it on video to show that day,
and now we've flipped it up on YouTube.
It's nothing fancy, but it works.
Thanks Travis.
.
. 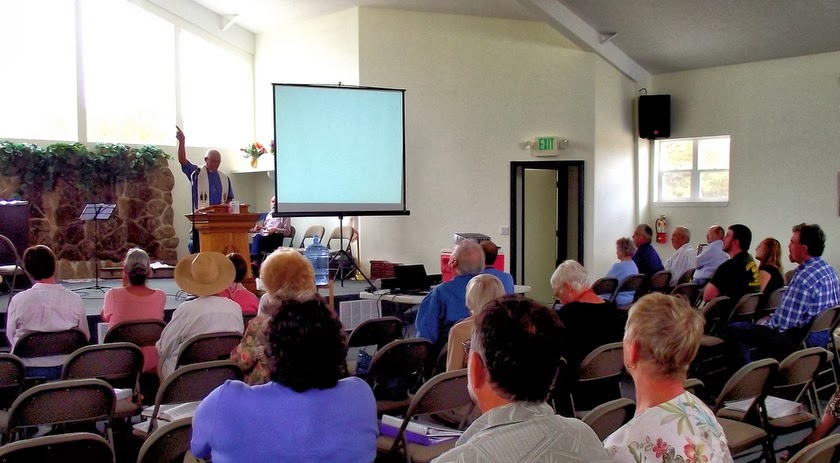 .
Above: Father Tommy Means of Epiphany
Episcopal Church of Socorro leads a litany (below).
This very much caught people's attention.
It was written by Rev. Talitha Arnold of
Santa Fe, New Mexico, in 2011.
Permisssion is allowed to reproduce and adapt
for worship services or church education.
So we adapted a little.
Publishing rights are reserved.
.
LITANY FOR ALL CREATION IN A
TIME OF DROUGHT AND FIRE.
God of all creation, of rain and fire, of ponderosa and pinon,we your people lift our prayer to You.
Lord, hear our prayer.
For rain in this thirsty land, and for hope in this hard time.
Lord, hear our prayer.
For the people who are dealing with a water shortage and its effects - both financial and personal - from Magdalena to the Plains, from the Rio Grande Valley to Elephant Butte Reservoir.
Lord, hear our prayer.
For firefighters on the front lines, for pilots and crews, and all who are working across the State of New Mexico at this time to contain fires - for their safety and stamina.
Lord, hear our prayer.
For the animals and birds that have lost habitat or lack water sources, for the plants and trees, rivers and lakes, and all creation that is suffering because of drought and fire, and often because of human greed or human carelessness.
Lord, hear our prayer.
For the farmers and ranchers, and others of our rural communities whose lives and livelihoods are threatened by fire, drought, or water theft.
Lord, hear our prayer.
For the just and wise use of the water You have given us, to be gracious stewards of Your creation and good neighbors with all people.
Lord, hear our prayer.
For the wisdom to conserve resources, and the grace to share them, with common sense and a dedication to protect what is a sacred trust - to understand that we are not so much owners as we are custodians of land, and to know that water is life.
Lord, hear our prayer.
For the local, state, and federal authorities and leaders - to have Your courage, O Lord, and Your vision, to make hard decisions for the common good, and the will to stand up to financial and political powers that would rob the state's citizens of what is theirs.
Lord, hear our prayer.
For a peaceful resolution to the difficulties that people face on the San Augustin Plains aquifer water project, and a fair, just, and timely answer from the New Mexico Court of Appeals.
Lord, hear our prayer.
Gracious God, You who hear the prayer of every heart, hear now the prayers we lift up to you now.
(A moment of silent prayer.)
Hear all of our prayers O God, spoken and unspoken.
Remind us that You are the One who listens and Who hears.
Grant us the wisdom to love one another, and this God-given earth, as You do.
We pray in Your name, and offer the prayer that Christ taught us:
Our Father, Who are in heaven, holy be Thy name, Thy kingdom come, Thy will be done, on earth as it is in heaven. Give us this day our daily bread, and forgive us our trespasses as we forgive those who trespass against us, and lead us not into temptation, but deliver us from evil.
Amen
.
. 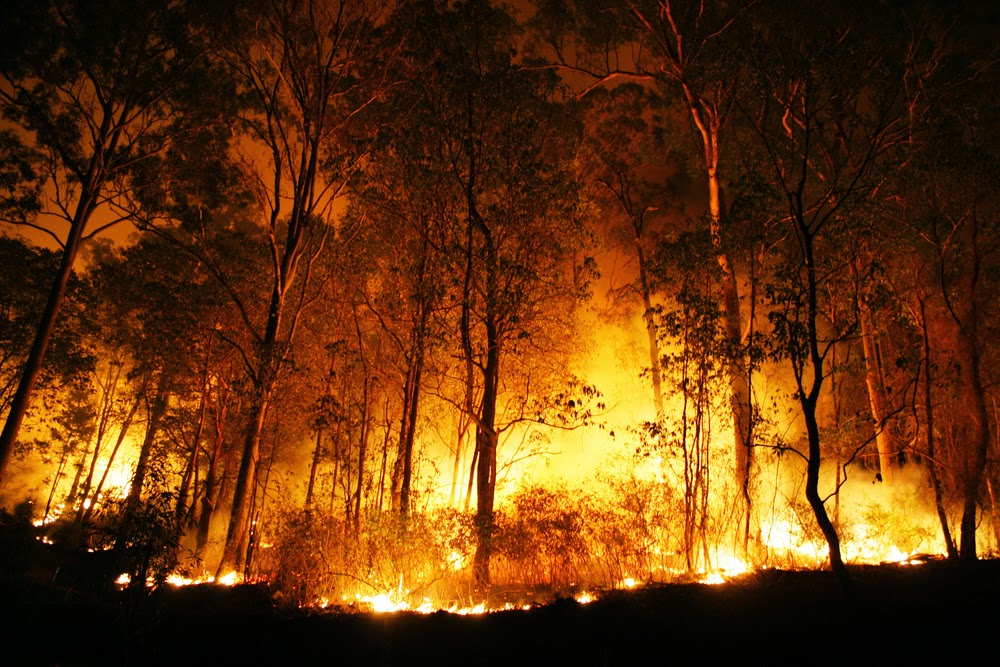 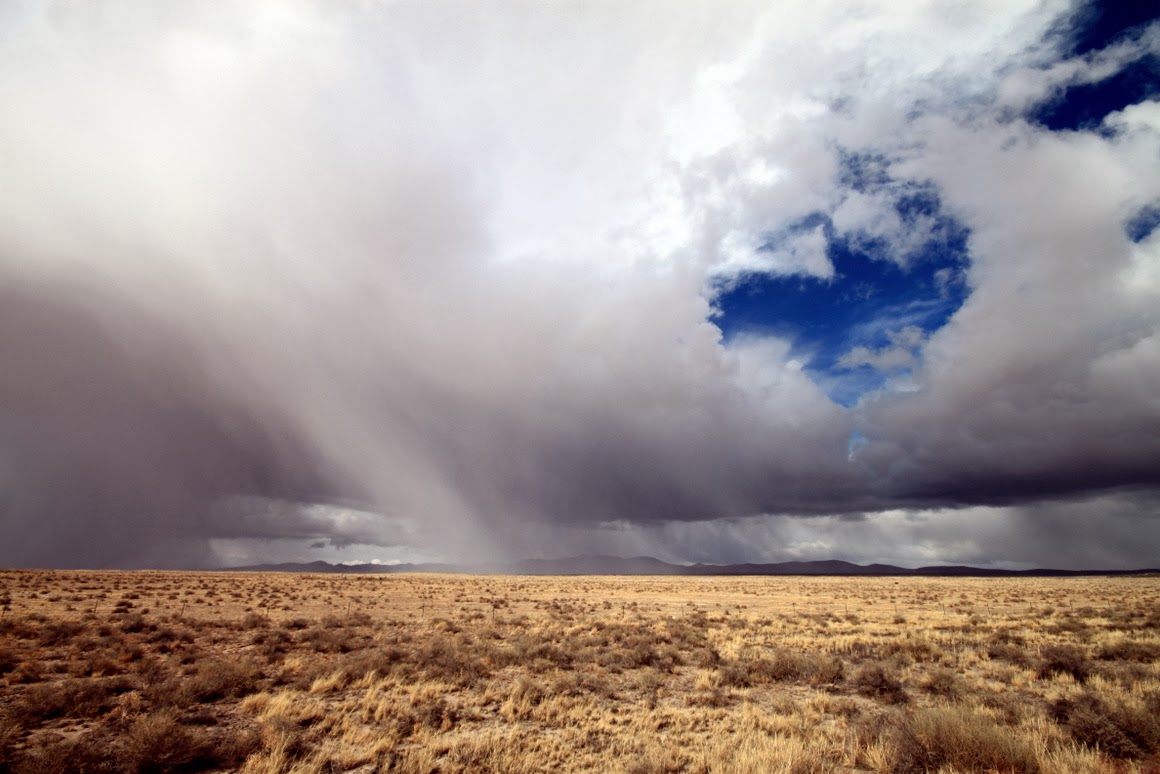 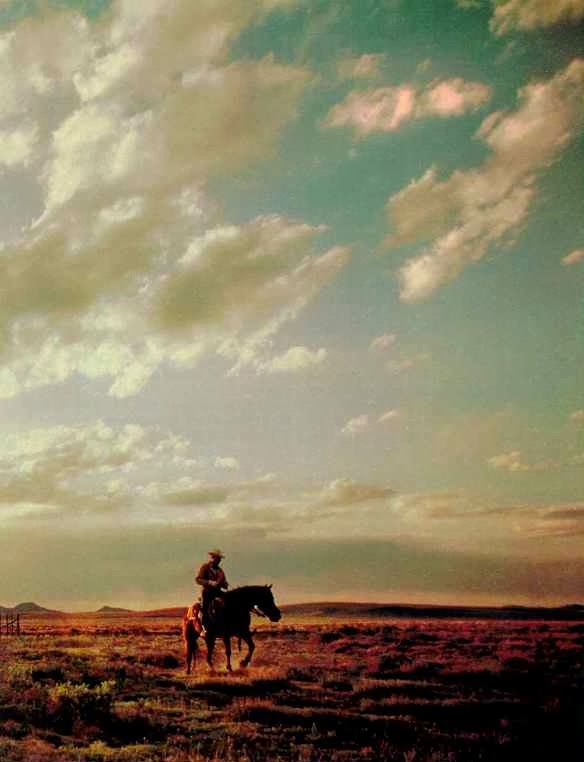 .
.
Nobody's claiming the drought is broken.
But we're in far better shape now than we were
four months ago, or even a year or two ago.
Now we say our THANKS, and pray for snow.
We're not kidding.
More to come....
. 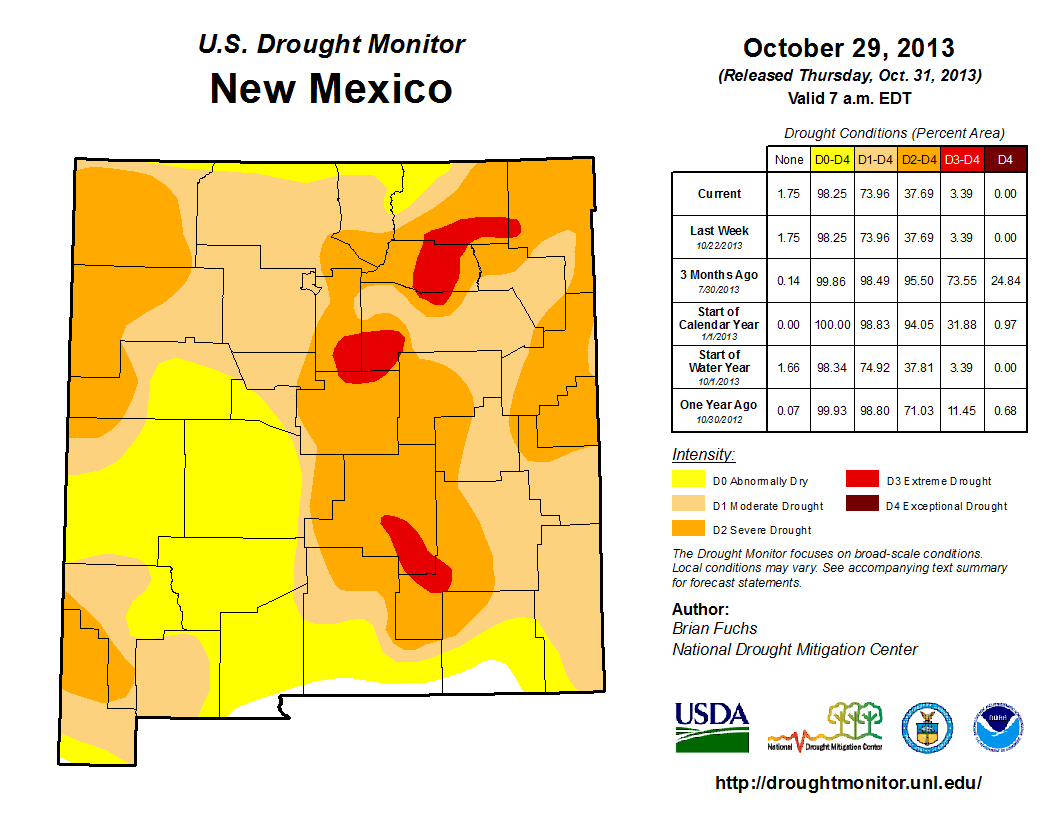 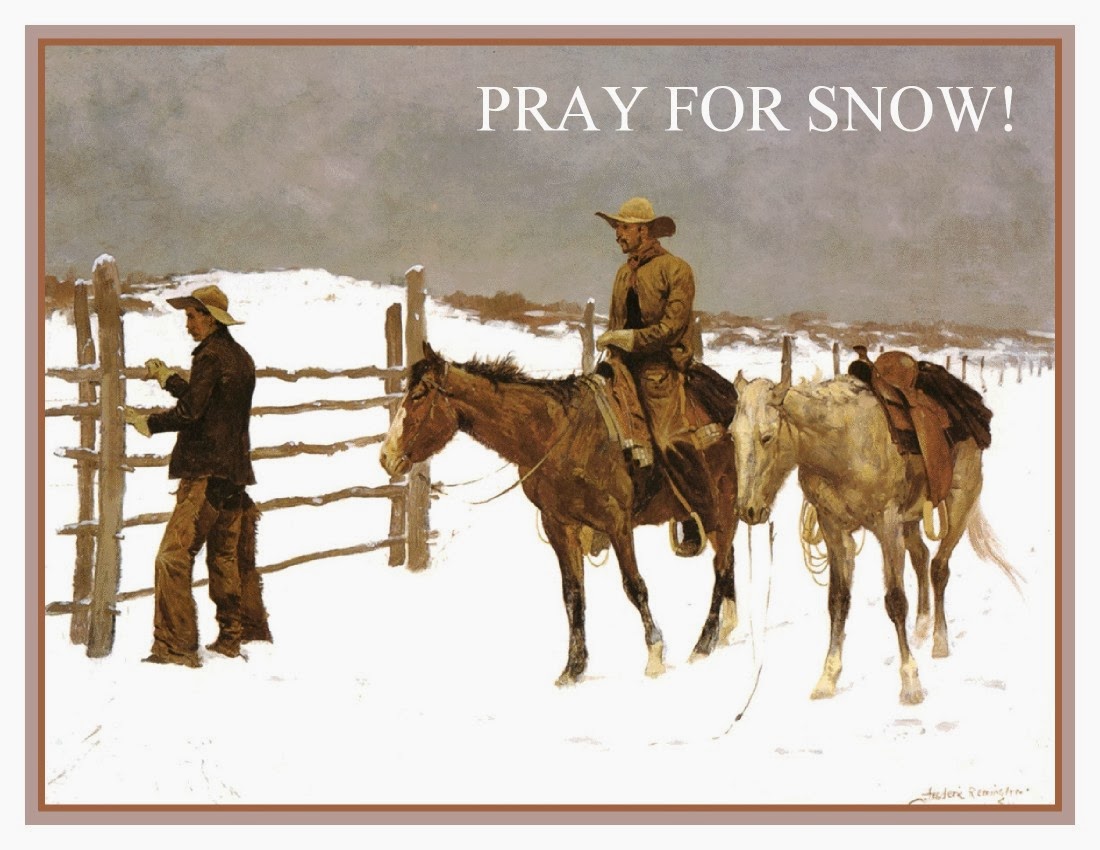 Posted by Matt Middleton at 4:55 PM